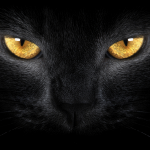 31 Edits since joining this wiki
November 13, 2013
0 Discussion posts
Hi, my name is Loudpelt or Loud for short, and yes I know how weird it seems. So here is a little about myself.

My name is Loudpelt and this is my story. I was born here in shadowclan and everyone in the camp tells me I was a born fighter, but I never believed them. I was always teased by my siblings, Applekit and Slenderkit, even though I wasn't a runt. I would also get beaten at the easiest compititions. I thought I would always be the kit everyone teased, and that I would never even become an apprentice. Lets just say I was and sometimes still am a she-cat that lacks confidence.

On the day I was to become an aprentice I was nearly dieing with fright. My brother and sister went up with a smile of confidence on their faces and were given their names and mentors. When it finally was my turn to go up I tripped on a rock and fell on my face and from the ground I could hear the laughter. I got back up and hurried up to our leader Twighlightstar, she had a smile on her face.

I bent my head down and prepared for the worst, only to hear her say,"Loudkit I have decided to take you on as my apprentice with your new name as Loudpaw."

It was silent then the cheering began I just walked away stunned thinking why me? I am not special in any way possible. I walked toward the other apprentices, there had been two others Ashpaw and his brother Lightpaw.

"You are so lucky that you got our leader as a mentor."Ashpaw said to me.

"Yeah, lucky."I said to him barely above a whisper. Ashpaw's pelt is a gray with blue tints to it, he riminded me of his mother in some ways like that. I began to walk back to the nursery, but then remembered that I was supposed to sleep in the aprentice den now. So I slowly mad my way over thinking what just happened? I was still in a kind of daze. I tried to avoid the looks me siblings were giving me and I still knew they were thinking the same things as me. I found a small area just big enough for me to fit if I curled up and went into a fitful sleep.

The next day I began my training and I was so scared that I was shaking all the way to the training grounds. Twighlightstar was waiting there for me and as soon as she noticed I was there she motioned for me to follow. I began to follow her and when we got to our destination Twighlightstar said to me"This is where we will meet and practice every day, understood?"

I nodded back at her and began sniffing the area. I saw her watching me and I thought I was doing something wrong so I stopped and said"Sorry".

"What have you to be sorry about, I was just supprised that you knew to sniff the place out."She said back to me. I was so supprised that no words came out of my mouth, so I just stood there looking scared.

"Now go over there and show me what you know."Twighlightstar said and pointed at a patch of dirt.

Retrieved from "https://warriors-fanfic-and-roleplay.fandom.com/wiki/User:Loudpelt?oldid=6352"
Community content is available under CC-BY-SA unless otherwise noted.